Almond-shaped eyes that distinguish the Asian race are no longer the standard of Asian beauty. The American look, aka the “Westernization of the eyelid,” is seeping into Asian culture, especially in Korea and China, where the Western beauty ideal is associated with success in life and in business.

“Round eye.” It was once a derogatory slang term Asians would use at times to refer to Westerners, but particularly, it applied to Americans. Now the term “round-eye” has taken on a whole new meaning in Asian culture and is associated with more than a touch of envy and beauty. How ironic that an Asian woman’s almond-shaped eyes, thought to be mysterious and alluring to many Western men, are now considered an ugly deformity in some Asian cultures, most notably in Korea and China, where the Western look is now coveted.

Both the Koreans and Chinese believe that appearance equates with success in business and in life. They believe the way to get ahead is to look beautiful because their societies place a high value on beauty. It is said that beauty is in the eye of the beholder, but it seems that Asian cultures are elevating Western standards of beauty while disowning their own natural beauty when it comes to the shape of their eyes.

Korean and Chinese parents are paying to have their young children’s eyes altered to be accentuated. Children as young as 12 years old are going under the knife with their parents’ blessings because of the view that eyelid reshaping surgery is a worthwhile investment and that prettier faces will pay off with increased self-confidence, a better job, and a finer marital mate. Many Korean and Chinese couples have only one child in their lifetime, and if that child is a daughter, parents want to do everything possible to help their little girls get ahead in the world.

Many Asians think round eyes are more beautiful than the eyes they were born with and they’re flocking to plastic surgeons for round-eye surgery. Seoul, South Korea is known as the plastic surgery capital of Asia. The International Society of Aesthetic Plastic Surgeons reports that in 2009, approximately 52,000 eyelid surgeries were performed in South Korea. South Korea’s biggest plastic surgery clinic reports that 30% of their clientele are foreign patients—and 90% of those foreign patients are Chinese.

The round-eye look is a sign of Western beauty, and Western ideals of beauty bombard Korean and Chinese media, which has bought into it. These Asian societies are inundated with images of gorgeous American women, including models, celebrities, and superstars who constantly appear on television, on billboards and posters, on the Internet, in magazines, in advertisements, in train stations and at bus stops, in storefront windows, and on TV commercials. Korean and Chinese actresses and pop stars also have a heavy influence; many famous Asian women have had this type of eyelid surgery, creating additional desire for young Asian women to have a pretty face just like their own stars. Beautiful American women pitch beauty products, creating desire and envy for the look that is now an accepted part of Korean and Chinese culture. Plastic surgeons report that young Korean and Chinese girls continually complain about their small, narrow eyes. Thinking that they will be prettier, they want their eyes to look bigger. In their eyes, bigger is better.

The technical term for eyelid surgery is blepharoplasty, a cosmetic procedure that reshapes the skin around the eye with incisions and sutures to create a defined crease on the upper lid. A fold is cut into the eyelid to create a double fold, an effect that widens the appearance of the eyes. Korean and Chinese women find this double-eyelid surgery to be attractive. Almost all eyelid surgeries of this type are for cosmetic reasons, but some women get it to prevent recurring eye infections due to inverted eyelashes. The surgery takes about 2 hours and recovery takes about a week. The cost is around $4000.

Surprisingly, it’s a growing trend in America too. The American Society of Plastic Surgeons reports that blepharoplasty is the number one cosmetic procedure among Asian Americans. From 2011 through 2012, the number of cosmetic eyelid surgeries performed on Asian American patients increased 20%.

Detractors see the eyelid surgery craze arising as a result of greedy Western countries and believe the fad is extremely harmful to the Asian psyche. Some actually see it as a form of “cultural imperialism.” Other terms bandied about by non-supporters include “beauty myth” and “racist self-hatred.” Some opponents argue that the eyes Asians are born with are among their most beautiful features, and altering them sends a message that Asians view themselves as inferior looking; it’s a tragedy some say, not to be proud of one’s roots. Still, others are not outraged, but saddened by the popularity of blepharoplasty, citing that mothers pass on to their children the message that the shape of their natural eyes is something to be ashamed of, and an unfortunate act of nature that must be cosmetically corrected in order to compete and be accepted in their respective societies.

Nevertheless, it’s more popular than ever, and most every Asian woman who undergoes blepharoplasty feels the final results are hot! 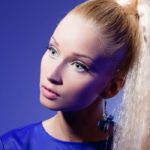 No, They’re Not Mannequins…These Dolls Are Made of Real Flesh and Blood