The history of body modification goes back to ancient times, of course, and isn’t just a product of today’s medical/surgical advancements. Felines have been a major inspiration, as seen in a variety of attempts to look like cats, tigers, and similar animals. Perhaps the appeal is the animal magnetism? The wearing of animal skin capes and headdresses by African tribes is one example. Other indigenous cultures have used facial and body tattooing and modification of anatomical features to achieve their own unique sense of beauty, such as Burmese neck lengthening or African lip plates and ritual body modifications, to help them identify as belonging to a particular cultural, ethnic, or tribal group.

Sometimes the modifications are only temporary, with people utilizing makeup techniques for special occasions. “Furries” is a term given to tens of thousands of men and women who attend events and conventions annually while wearing fur suits or body paint, or showing off permanent tattoos or procedures, to pay homage to a wide variety of animals within the furry creature domain.

Some people have sought both temporary and permanent changes to be more cat-like. Examples include the makeup used by men and women in ancient Egypt, often regarded as one of the most influential looks of all time. In the 1960s, one trend involved creating cat eyes using black liquid eyeliner that extended beyond the corners of the eyes to elongate them. Cats have always been popular Halloween costumes, and tattoos of leopard spots are currently hot. Some body modifiers employ piercings that simulate cat or tiger whiskers.

Besides the cultural aspect, cat-like looks have also become a fashion ideal at certain points in history. There has always been something very cool about cat eyes, which is evident by accessories such as the eyeglass frames made popular by Marilyn Monroe and Audrey Hepburn in the 1950s, which are still popular today.

More permanent cat-like looks have been achieved as well. Jocelyn Wildenstein is known for having an appearance that is quite feline. It may not have been her original intention to adopt a feline look; however, she is referred to as the “Catwoman.” For some individuals, in contrast, a cat-like look is the true goal. Take Dennis Avner, an avid body modification enthusiast, also known as “Stalking Cat.” His quest was specifically to look like a tiger, and he achieved a remarkable likeness through multiple rounds of plastic surgery, piercing, and tattooing. Whereas seeking this look through more permanent means (other than just by wearing a costume) is quite controversial, Mr. Avner was quite successful in reaching his goal, receiving press attention and recognition in the Guinness Book of World Records in 2009 for the feat. Avner passed away at age 54 in unclear circumstances in late 2012. 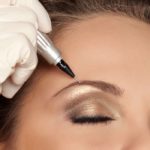 Permanent Makeup: Apply It Once, Then Fuhgetaboutit…for the Rest of Your Life!