When the COVID-19 surge began and patients started pouring into Mount Sinai Hospital in New York City, neuroscientist David Putrino had to close the doors of his laboratory, as all nonessential research was put on pause. But he found a better use for the lab. “We couldn’t see patients or do research, so the 3,000 square feet of space was sitting there not being used,” Putrino says. “So I said, let’s change this into recharge rooms for healthcare workers.”

A physical therapy and rehabilitation researcher who studies how people can recover their skills — whether they are Olympic athletes or ALS patients — Putrino had worked on similar projects. He had been collaborating with Mirelle Phillips, the founder and CEO of Studio Elsewhere. An art startup that specializes in fast and affordable area makeovers, Studio Elsewhere doesn’t rebuild spaces but cosmetically redecorates them to create multisensory experiences that help people de-stress and rejuvenate. Using silk plants, images of landscapes and waterfalls, meditative music, and diffusers that disperse calming scents of chamomile and lavender, Studio Elsewhere transformed the lab within a day. Typically used to study how the latest robotic, neurostimulation and computing technologies can neuro-rehabilitate people after strokes, spinal cord and traumatic brain injuries, the lab was transformed into a miniature nature oasis.

The dramatic makeover yielded eight recharge rooms, some individual and others large enough to accommodate groups of four. All proved very popular with the hospital staff, particularly during stressful surge times, when grueling shifts and patients’ suffering pushed frontliners to the brink. The organizers created an online booking system to manage occupancy and ran a survey to gather users’ feedback and comments. Healthcare workers who used the recharge rooms reported a 60% reduction in stress levels after only 15 minutes of being there, according to a study published last November in Frontiers in Psychology.

These aren’t just placebo effects, Putrino notes. According to scientific literature, nature and green spaces positively influence physiology. They help reduce heart and respiratory rates and blood pressure, making people breathe slower, which promotes a general feeling of well-being. “Spending time in the naturally beautiful environments can be cognitively restorative in a very short amount of time,” Putrino says — and nature’s mimics can achieve a similar effect. “These immersive, multisensory experiences are designed to change your physiology.”

Such biophilic designs, where bio stands for nature and philic for love, have positive effects on people’s well-being and even creativity, says Jie Yin, a postdoctoral fellow at Harvard T.H. Chan School of Public Health, whose dissertation focused on bringing nature indoors. The biophilia hypothesis, first proposed in the 1980s, states that humans have an innate connection with nature from their evolution. That’s why we feel calm, healthy and happy when we immerse in it. “Epidemiology studies associate nature with positive health outcomes, but people spend most of their time indoors, especially in this pandemic,” Yin notes. So bringing any natural elements or their analogues into indoor spaces helps trigger that innate connection, which is what Mount Sinai’s solution did. “That was a nice application of a biophilic design,” he says.

This nature-induced recharge process stems from the so-called soft fascination, a phenomenon in which people focus their attention on easy-to-observe experiences — such as tree leaves quavering in the wind. That’s the opposite of hard fascination, which happens when we watch TV or follow a game, which requires attention. Healthcare work demands a lot of concentration and focus, so chilling in front of a screen after an exhausting ICU shift doesn’t really relax people cognitively — the brain still stays focused. Meanwhile, soft fascination experiences let our minds unwind. “There’s a theory that people in urban environments have too much stimuli from daily work, so exposing them to natural elements can help shift their direct attention,” Yin says. “And soft fascination about the environment can help replenish their attention.”

“You can only be cognitively present and focused so much of the time, before you become completely drained,” Putrino explains. “We need some time when we can reset.”

While setting up the rooms, Putrino and collaborators expected that most people would prefer to relax alone, but many favored recharging in groups while maintaining social distancing. “I think it’s because after all the trauma they experienced together, it felt right that they calmed down together as well,” Putrino says. As lockdown restrictions lifted in summer, his lab reopened, but the recharge rooms didn’t go away — the team re-created them throughout the hospital system in multiple buildings.

Not every hospital has the space and ability to create recharge spaces, but physicians and healthcare workers can do this at home, too. “Try your best to bring some natural elements or their analogues to your house or office,” Yin suggests. One can pick a small area of the house to watch trees out the window or nature videos on a laptop. A scent diffuser, soft lighting and a couple of plants can complete the makeover — and the space can be designated as a soft-fascination “sacred corner” where one goes to recuperate. “These 15 to 20 minutes allow you to resolve unresolved thoughts, process emotions and things that happen during the day,” Putrino says. “It allows you to subconsciously work through the load you have been carrying.” 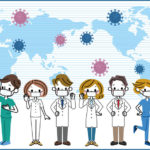 Top Lessons of 2020: Physicians Share What Working Through the Pandemic Has Taught Them