Direct-to-physician marketing of opioids by pharmaceutical companies is associated with an increased prescribing of opioids, and is further linked to deaths from prescription opioid overdoses, according to study results published in JAMA Network Open.

The investigators of this population-based study sought to identify the association between direct-to-physician marketing of opioids by pharmaceutical companies with physician prescribing rates and subsequent deaths from opioid-related overdoses across US counties.

Between August 2013 and December 2015, the investigators found 434,754 payments totaling $39.7 million for nonresearch-based opioid marketing. These payments were distributed to 67,507 physicians across 2208 US counties. Adjusting for county-level sociodemographic factors, mortality from opioid overdoses between August 2013 and December 2016 was significantly associated with all 3 opioid marketing measures: opioid-related deaths increased with each 1 standard deviation increase in marketing value in dollars per capita (aRR 1.09; 95% CI, 1.05-1.12), number of payments to physicians per capita (aRR 1.18; 95% CI, 1.14-1.21), and number of marketing interactions per capita (aRR 1.12; 95% CI, 1.08-1.16).

One limitation of the study included the inability to exclude reverse causation; however, the 1-year lag in data extraction was designed to address this. Mortality outcomes related to prescription opioid overdose may have included other potent, nonprescription opioids or substances. Data sources did not differentiate between prescribed or illicitly acquired opioids, nor were they able to distinguish between appropriate or inappropriate opioid prescribing. Finally, the potential effects of opioid marketing on prescribing rates and death were not examined for long-term trends.

Opioid marketing is associated with increased prescribing of opioids, countering national efforts to reduce opioid prescriptions in the US. The influence of the pharmaceutical industry marketing of opioid products should be reexamined amid the national opioid crisis, the researchers concluded. 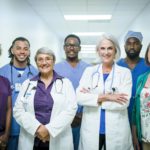 Examining the Diversity Problem in Dermatology