People may associate political correctness with conformity, but new research finds it also correlates with creativity in work settings. Imposing a norm that sets clear expectations of how women and men should interact with each other into a work environment unexpectedly encourages creativity among mixed-sex work groups by reducing uncertainty in relationships.

The study highlights a paradoxical consequence of the political correctness (PC) norm. While PC behavior is generally thought to threaten the free expression of ideas, Professor Jennifer Chatman of the Haas School’s Management of Organizations Group and her coauthors found that positioning such PC norms as the office standard provides a layer of safety in the workplace that fosters creativity.

“Creativity is essential to organizational innovation and growth. But our research departs from the prevailing theory of group creativity by showing that creativity in mixed-sex groups emerges, not by removing behavioral constraints, but by imposing them. Setting a norm that both clarifies expectations for appropriate behavior and makes salient the social sanctions that result from using sexist language unleashes creative expression by countering the uncertainty that arises in mixed-sex work groups,” says Chatman.

“Creativity from constraint: How the PC norm influences creativity in mixed-sex work groups,” forthcoming in Administrative Science Quarterly, is coauthored by Chatman and 2 Haas PhD graduates, Jack Goncalo, who now teaches at Cornell University, and Jessica Kennedy, now at Vanderbilt University, as well as Michelle Duguid of Washington University.

“Our contention is controversial because many have argued that imposing the PC norm might not just eliminate offensive behavior and language but will also cause people to filter out and withhold potentially valuable ideas and perspectives,” says Chatman, “We suggest that this critical view of the PC norm reflects a deeply rooted theoretical assumption that normative constraints inevitably stifle creative expression—an assumption we challenge.”

The authors designed their experiments taking into account the different incentives men and women have for adhering to the PC norm. Men said they were motivated to adhere to a PC norm because of concerns about not being overbearing and offending women. Whereas one might expect women to perceive a PC norm as emblematic of weakness or conformity, women in the experiment became more confident about expressing their ideas out loud when the PC norm was salient or prominent. In contrast, in work groups that were homogeneous—all men or all women—a salient PC norm had no impact on the group’s creativity compared to the control group.

Study participants were randomly divided into mixed-sex groups and same-sex groups. Next, researchers asked the groups to describe the value of PC behavior before being instructed to work together on a creative task. The control groups were not exposed to the PC norm before beginning their creative task. The task involved brainstorming ideas on a new business entity to be housed in a property left vacated by a mismanaged restaurant—by design, a project that has no right or wrong strategy.

Instead of stifling their ideas, mixed-sex groups exposed to the PC norm performed more creatively by generating a significantly higher number of divergent and novel ideas than the control group. As expected, same-sex groups generated fewer creative outcomes. Previous studies have found that homogenous groups are less creative because people in these groups are similar to one another with similar ideas and, therefore, less divergent thinking occurs.

The above story is reprinted from materials provided by the University of California, Berkeley Haas School of Business via Newswise. 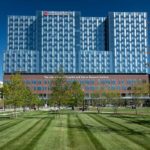 The New James: Ohio State Creates a Model for Cancer Hospitals to Come